What is a qualifying cause of delay under AS 2124?

Clause 35.5 identifies the causes of delay for which the contractor can claim an extension of time under AS 2124.  Compared with other forms of contract, the list of qualifying causes is relatively broad.

Events that occur before the date for practical completion

Clause 35.5(a) permits the contractor to claim an extension of time if it is delayed by any event that occurs on or before the date for practical completion that is beyond the reasonable control of the contractor.  This is expressed to include (but not to be limited to) industrial conditions and inclement weather.

This wording means that anything that occurs before the date for practical completion will entitle the contractor to claim an extension of time, provided it is beyond the contractor's reasonable control.

The list of events in clause 35.5(b) are further examples of events for which an extension of time can be claimed, each of them being events beyond the contractor’s reasonable control.

Events that occur before, on or after the date for practical completion

If the delay event occurs before, on or after the date for practical completion, the list of qualifying causes is narrower – but still relatively broad.

Where more than one event causes concurrent delays, and any of those delay events is not a cause referred to above, the contractor will not be entitled to claim an extension of time.

This is different to the position under AS 4000, which allows an apportionment for qualifying and non-qualifying causes of delay.  (See clause 34.4 of AS 4000.)

When is the principal liable to pay delay costs?

Clause 36 of AS 2124 obliges the principal to pay any delay costs where an extension of time has been granted for any of the following delay events:

An example of a cause of delay falling within the third category is a delay caused by a latent condition. This is because clause 12.3 expressly entitles the contractor to a valuation where a latent condition causes the contractor to carry out additional work, use additional construction plant or incur extra cost (including but not limited to the cost of delay or disruption).

Completing the Annexure – a common mistake

One of the Annexure items in AS 2124 appears as follows:

Confusion often arises in relation to this item.

Sometimes, a principal or project manager will insert ‘Nil’ or ‘Not applicable’ in this part of the Annexure, believing that this means delay costs will never be payable to the contractor.

However, when read in conjunction with clause 36, all this is likely to mean is that there are no additional delay events for which delay costs are payable.

This wording is unlikely to deprive the contractor of its entitlement to claim delay costs under clause 36 for the events described in clause 35.5(b)(i) (being delays caused by the Principal and others for whom it is responsible) or elsewhere in the contract (for example, for latent conditions under clause 12).

If you wish to limit the circumstances in which delay costs are payable, the safest way to achieve this is to amend the contract or use special conditions, using clear words that explain what is intended.

Summary of delay entitlements under AS 2124

The table below summarises when the contractor can claim an extension of time and/or delay costs under AS 2124.

This summary assumes that the Annexure has not been completed in a way that would alter the position under an unamended AS 2124, and that there are no applicable special conditions.

The table also assumes that the contractor has not caused or contributed to the delay.  Where that is the case, the contractor will not be able to claim an EOT, at least to the extent of its contribution.

When can the contractor claim relief for a delay under AS 2124? 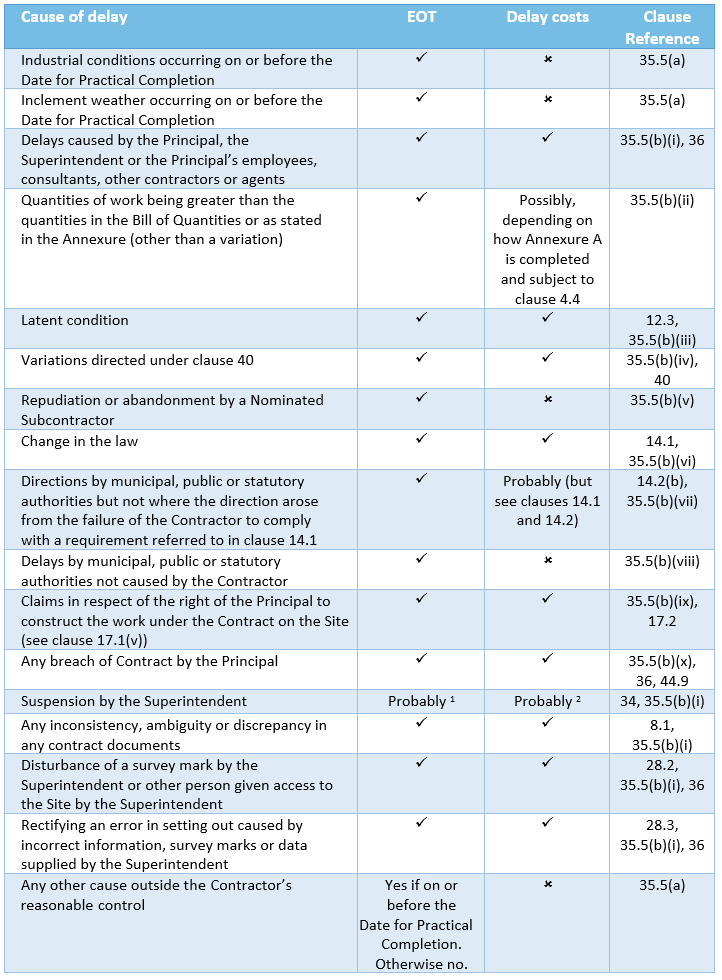 Morgan is a specialist construction lawyer in Sydney who helps companies navigate through large or unusual projects and streamline their contracting processes through simplified contracts.

Morgan is a specialist construction lawyer in Sydney who helps companies navigate through large or unusual projects and streamline their contracting processes through simplified contracts.