What is a qualifying cause of delay under AS 4000?

The definition of "qualifying cause of delay"

The definition of ‘qualifying cause of delay’ is found in clause 1, and is as follows:

" a) any act, default or omission of the Superintendent, the Principal or its consultants, agents or other contractors (not being employed by the Contractor); and

i)    a breach or omission by the Contractor;

ii)    industrial conditions or inclement weather occurring after the date for practical completion; or

The delay events described in (a) will be qualifying causes of delay, whereas the events in (b) will not. This immediately raises the question: what if the delay event is not mentioned in (a) or (b)?

The drafting in (b) seems to imply that delays caused by inclement weather or industrial conditions that occur before the date for practical completion will be qualifying causes of delay.

But what about a delay event that is not mentioned at all - say, a delay caused by a council in issuing a permit or certificate that is outside the control of either party?

The answer is unclear.

Many contracts modify or replace the definition of ‘qualifying cause of delay’ to address this ambiguity.

"a) any act, default or omission of the Superintendent, the Principal or its consultants, agents or other contractors (not being employed by the Contractor); or

However, this definition is not the only provision under which the contractor may be entitled to claim delay costs.

For example, clause 11.2 requires a valuation to be made of any difference in cost incurred by the contractor as a result of the introduction of new legislative requirements. Although not expressly stated, it appears the intent is that this 'cost' would include any additional cost incurred by reason of a delay.

Similarly, clause 25.3 states that the effects of a latent condition shall be a deemed variation. Again, the intention appears to be for the contractor's entitlement to extend to delay cost.

Consequently, to understand the contractor's entitlements as a whole, you must look beyond the definitions in clause 1.

The Annexure Part A

However, these two annexure items are a frequent cause of confusion.

Whereas item 23 is intended to be a list of causes of delay that will not be a qualifying cause of delay, item 26 is a list of additional events that will be treated as compensable causes.

The table below identifies when the contractor can claim an EOT and/or delay costs under AS 4000.

It assumes that items 23 and 26 in the Annexure Part A have been left blank.  If that is not the case, the position will probably be different.

This summary also assumes that the contractor has not caused or contributed to the delay.  If that is not the case, the contractor will probably not be able to claim an EOT, at least to the extent of its contribution.  (Note that clause 34.4 allows an apportionment where concurrent delays overlap.)

In the table below:

Also note that, in some circumstances, an entitlement may arise under more than one provision.

When can the contractor claim relief for a delay under AS 4000? 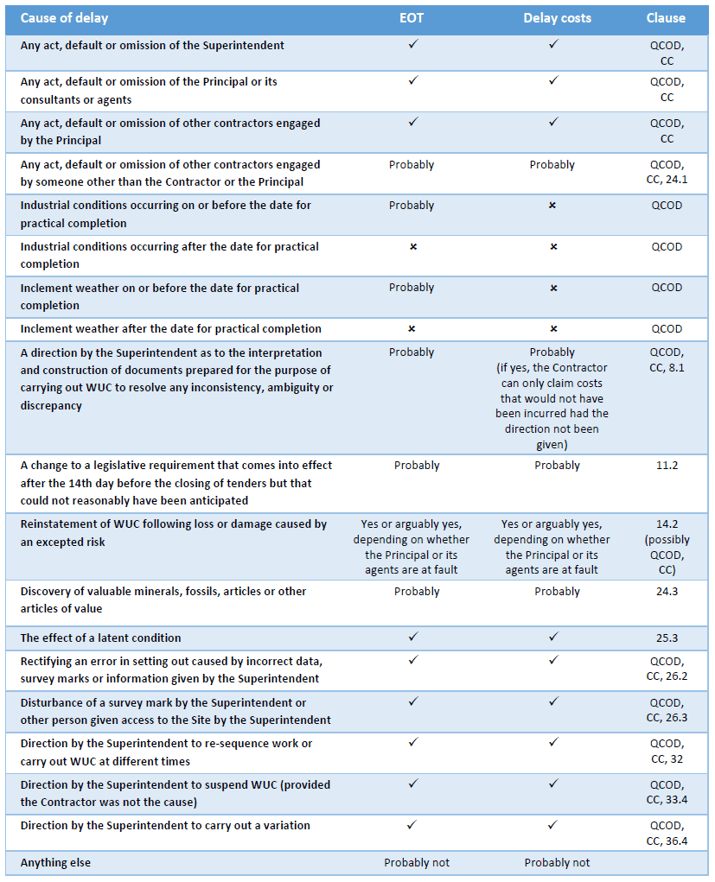